The Blog that Ate Manhattan: Biking South on the NYC Westside Greenway 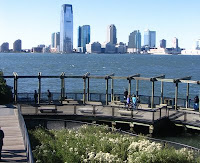 TBTAM
Dr. TBTAM does it again with a nice photo tour of an autumn Hudson River bikeride this last weekend. She has a good photo tourguid-ish eye. No sound, tho.

Jane Lui is a San Francisco songwriter who is touring the US now, 2008. Nominally opening for songwriter Greg Friedman, their New York shows at the National Underground and Rockwood Music Hall merged into a round robin, and Jane sometimes accompanied Greg directly. I had discovered Jane as one of the gems of the strong San Diego scene and grabbed an interview on her last sweep through NYC, touring as singer for the band Starline Theorie. I like her range. To listen or download the interview, click the title, or here.
Posted by Andy at 10:00 PM No comments:

Andy
*over 20,000 downloads* I am Andy. I record the mundane, creative sounds of New York City life and post them occasionally here as MP3s. I invite you to subscribe to the "Tourist In The City" podcast on iTunes - it's free. Really.